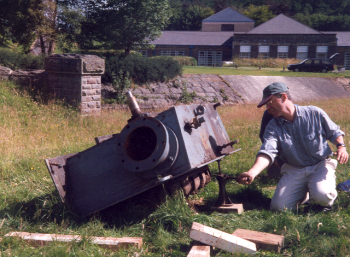 At a meeting in Brecon (July 2010), we happened to encounter Bill Cave, a retired anesthetist living in Abergavenny. Chatting to him, we discovered that our Talybont Energy turbine has a twin in Uganda! None of the current Talybont Energy Directors knew anything about this piece of our history which preceded the installation of the current community turbine. We were intrigued and delighted.

Back in 2001, Bill was walking with a friend, Charles Swainson, along the Talybont Reservoir dam. Both of them had been involved for nearly 20 years with a 60kw hydro turbine at a remote, off-grid hospital called Kisiizi in Uganda.  As they walked, they happened to glance down to the (then disused) turbine house and spotted the old rusting turbine which lay (and indeed lies still) next to the turbine house. They climbed down to have a look and discovered that the machine was a Gilkes, the same as their machine at Kisiizi and that the cast iron runner seemed just the right size to replace the runner on the Kisiizi turbine which was nearly worn out.

On learning that the turbine and runner were due to be taken away by a scrap merchant any day soon, Bill quickly approached Dwr Cymru to ask for it. The company were most helpful and in just one telephone call happily donated the runner for use at Kisiizi.

When, some years later, the Talybont runner arrived at Kisiizi and was about to be installed, it was discovered that the shaft bore and keyway were of a very slightly smaller size. However, a quick trip to the central Ugandan railway workshops, 300 miles distant from Kisiizi, put this right and the runner was fitted.

Ever since, it has been the sole turbine powering the hospital until the end of 2009 when a new 280kW turbine came on line at Kisiizi. This new turbine, which supplied both hospital and surrounding community, unfortunately suffered badly when a mudslide engulfed the turbine house in May 2010. To keep the hospital in electricity the old 60kw Gilkes with its Talybont runner had to take over again until the devastation was cleaned up. The Talybont twin now acts as the permanent back up turbine for the hospital.

Thank you to Bill Cave for telling us this bit of the Talybont turbine history and Dwr Cymru for helping Kisiizi hospital out.